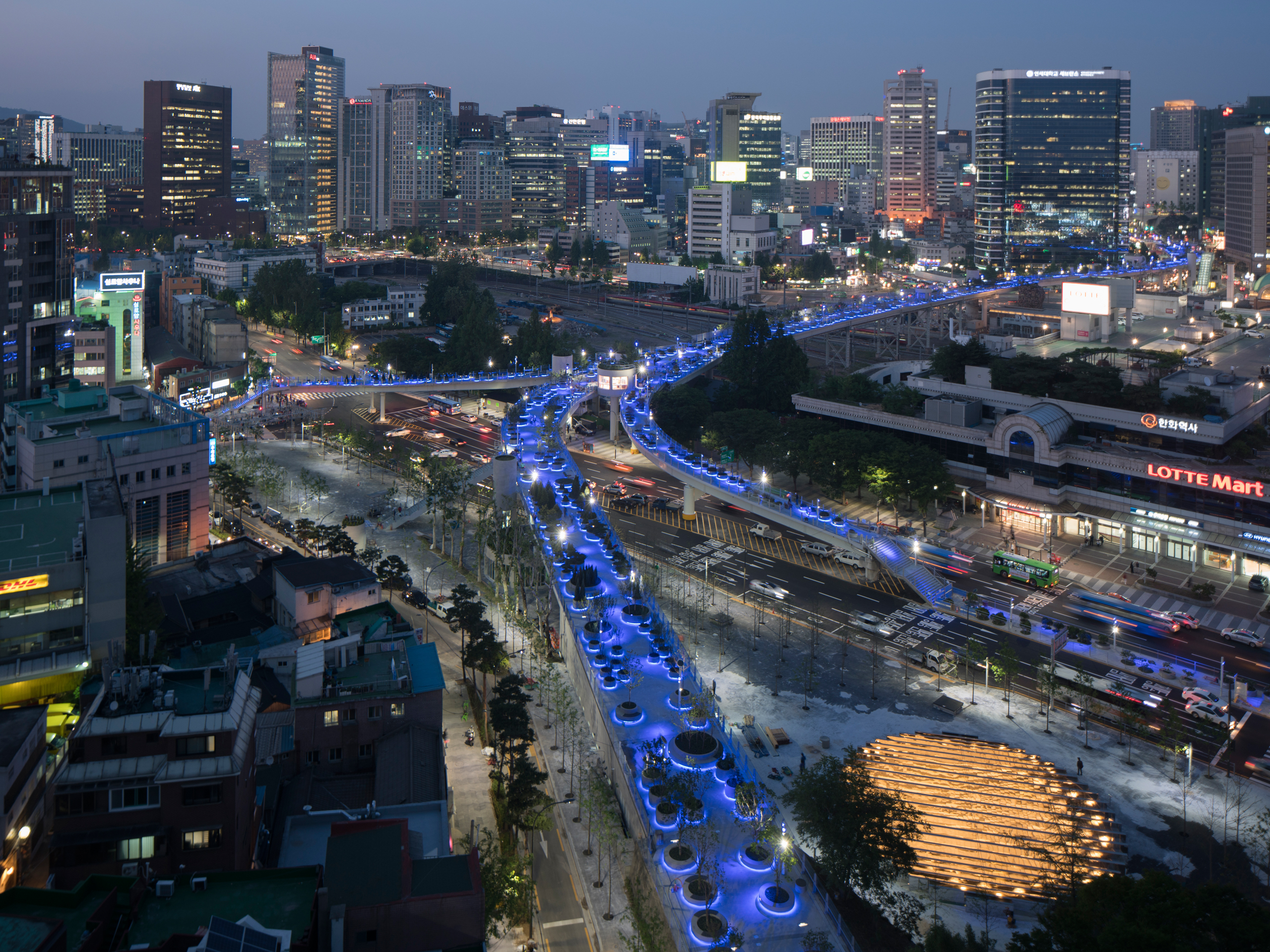 When we envisioned future cities 40 years ago, we saw flying cars, teleporation, and digital gadgets as the norm.  That isn't the case today with the exception of the digitized gadgetry we can't live without.  What is true, however, is that we are realizing perhaps the future of our cities doesn't reside so far outside the reaches of our imagination but are closer than we ever thought to consider.  The people who live and work within and the human scale of things seems to be what is driving the future of our cultures, economies, and social ties to one another.  So when the Metropolitan Government of Seoul repurposed an old 45-year old overpass roadway into a pedestrian only parkway, we are able to take a glimpse into the future of urban planning and the future of cities worldwide.

In May, 2017, the Seoullo 7017 was opened to all people 24 hours a day.  "Seoullo" stands for Seoul Street and "7017" refers to the birth "1970" and the rebirth "2017" of the bridge (17 also stands for its 17m height off the ground and the 17 connections to other pedestrian routes).  It is a stretch of former roadway that was deemed unsafe for further automotive transportation use and was slated for demolition before the consideration of it being utilized as a pedestrian walkway.  The $33 million project was headed by Dutch architecture firm MVRD (Credit most of the pictures on this page) and involved a nearly 2 year long reconstruction and retrofit. 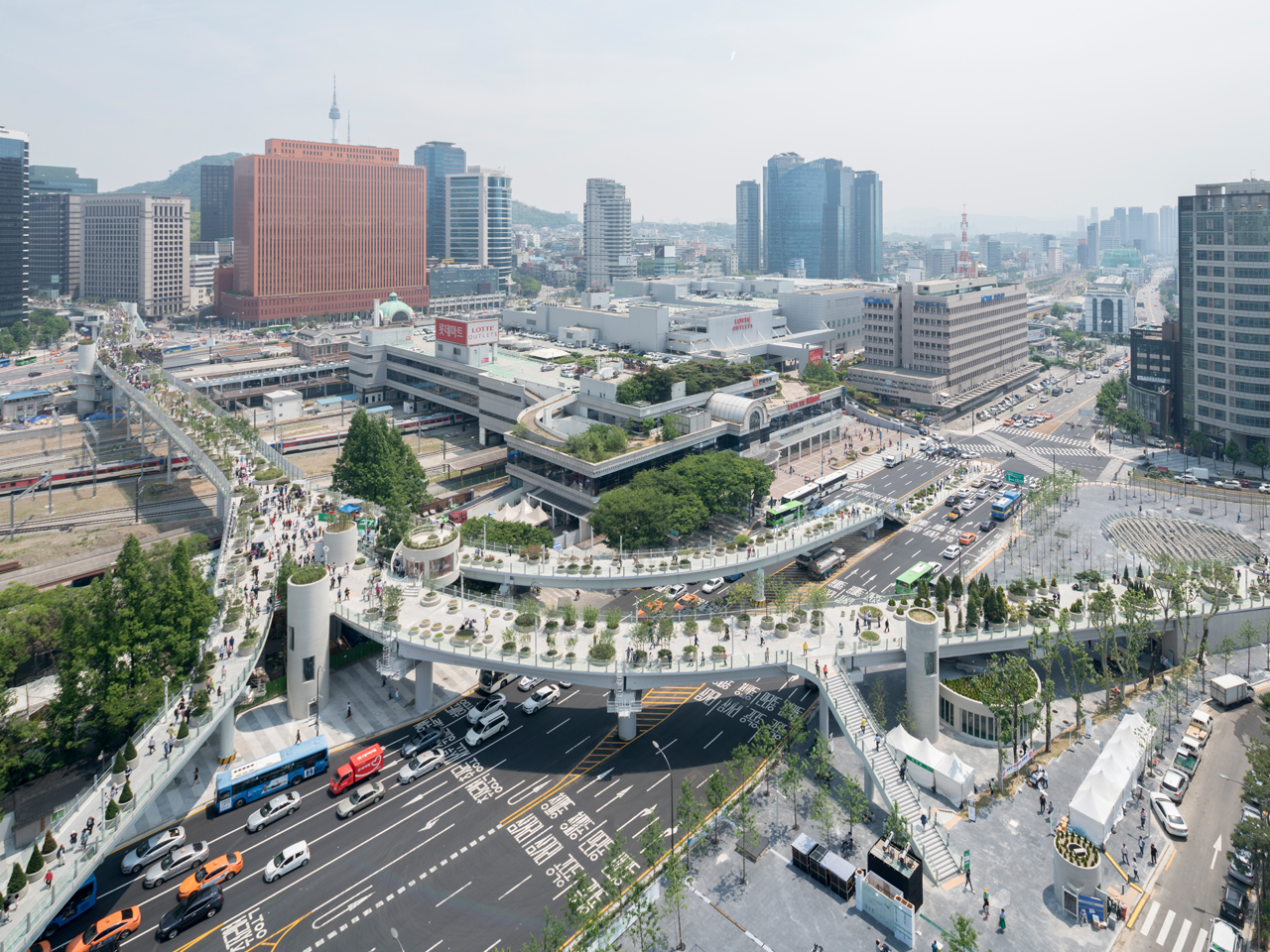 The bridge was initially built up during the heavy urbanization of South Korea in the 1970's and was a symbol of that progress.  Today, the adapted reuse of the bridge is a symbol of regeneration and revitalization.  Kwon-Ki Kim, director of regeneration planning stated: "If development in the past was about completely demolishing an old bit of infrastructure to build something else on top of it, urban restoration is about keeping and making use of the structure, thereby cutting down on waste and revitalizing the local economy as well. Seoullo 7017 is both the starting point and the model for such efforts."

Seoullo 7017 will be a walkable arboretum with around 200 different types of greenery including all-year-round roses, apple trees and pine trees, shrubs and other flowers totalling 24,000. Scattered throughout the bridge will also be book cafés, libraries, flower shops, puppet theatres, convenience outlets, and other planned/scheduled attractions.

The picture above is of Chunggyechon which is another adaptive reuse project from 2005 of an old polluted stream/canal that ran through Seoul.  Today it is an attraction for many city dwellers and tourists alike and has beautified an otherwise eyesore into a bona fide destination within the city.

When cities take into account what is best for its people results such as Seoullo 7017 or Chunggyechon come to fruition.  These days there is a lot of bureaucracy and vested financial interests involved in a lot of these types of developments and results in lackluster execution because of the personal interests involved.  It would be a tremendous change for cities to put the greater good and welfare of its citizens first, and just watch the enjoyment and standards of living skyrocket.  Oh yeah, neighboring property values would follow suit, too.